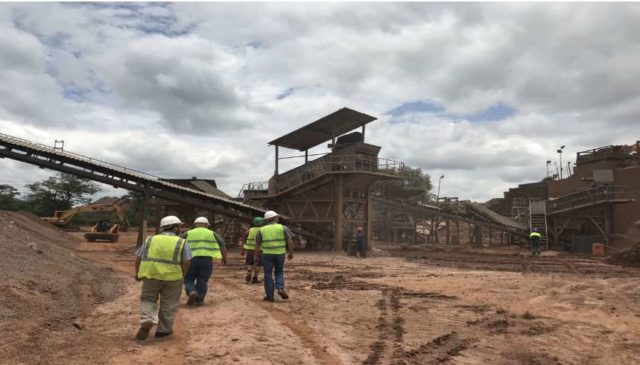 AIM-listed resource development company Vast Resources has recently appointed ANDREW PRELEA as its new CEO. With a clear strategy in place for the development of its Romanian assets, the Pickstone Peerless gold operation in Zimbabwe has by no means taken a back seat. The asset is entering the second phase of a development plan which will see it transition from an oxide to a sulphide operation in its remaining 20 year mine life. CHANTELLE KOTZE writes.

Vast Resources began 2018 with the appointment of Prelea as CEO from his former role as the president of the company’s Romanian subsidiary. Prelea replaced Roy Pitchford, who successfully led Vast Resources from an exploration and development company when he joined in 2014 to a production company with two operating mines and a third due to come on stream in the near future at the time of his departure in December 2017.

With significant involvement in the Romanian mining and metals sector that goes back some 26 years, Prelea has set out a framework of objectives for 2018 intended to deliver real returns for the company.

Under his leadership, Vast Resources believes that 2018 is set to be a hugely significant and active year, in which the company aims to become a profitable mid-tier production company.

At a corporate level, the new CEO has set the wheels in motion by implementing a wide-ranging cost cutting and saving programme which will be implemented during the company’s next phase of growth. By balancing this with increased operational performance at its producing mines, Prelea believes that he can substantially enhance Vast Resources’ current financial model.

From an operational perspective, 2018 will see the company continuing to focus on its core assets in Romania and Zimbabwe – with comprehensive work programmes underway aimed at directly increasing production and efficiency at every asset through optimisation, as well as moving towards operational profitability in Romania in the near-term to ensure the growth of the business.

Vast Resources has a 25% indirect stake in the Pickstone-Peerless mine in Zimbabwe, located 100 km south-west of Harare. The 584 ha operation produced first gold in September 2015 with its first gold smelt producing 8.5 kg of gold bullion. Since 2015, Vast Resources has been producing gold through the open cast mining of the oxide cap zones at both the Pickstone and Peerless pits at a steady production rate of close to 25 000 ozpa at a cash cost of about US$700/oz.

A post-Mugabe future in Zimbabwe

President Robert Mugabe’s 37 years of rule came to an end on 21 November 2017 when he was pressured into resigning from his position. Mugabe was replaced by Emmerson Mnangagwa who was sworn in as president on 24 November 2017.

Although significant uncertainty remains around what will happen next, Mugabe’s iron-fisted rule is certainly over and Zimbabwe can undoubtedly begin its process of regeneration.

While it may be a slow process, Zimbabwe is certainly expected to see a revival in its economy and attract foreign investment – two things the country desperately needs.

In order to process the sulphide portion of the Pickstone-Peerless asset, Vast Resources and its partners has had to build a sulphide plant alongside the company’s existing 20 000 tpm carbon-in-leach (CIL) plant.

The new sulphide plant comprises a second primary mill, five additional CIL tanks and a gravity concentration plant (already commissioned) and flotation circuit (that will come on line when the sulphides are accessible).

Not only has this transition necessitated an upgrade to the plant, but it will also allow the company to simultaneously increase the production rate and unlock the higher sulphide grades, Prelea explains. He adds that this would provide enormous upside and further enhance the performance of Pickstone-Peerless.

“We are already seeing increases in production now as a result of the increase in the crushing and milling circuit as well as the new CIL plant,” says Prelea.

To prepare for the transition, Vast Resources has already successfully begun increasing the tonnage of ore being mined – with the grade of the ore increasing as expected. “ Vast Resources expects to almost double the installed primary milling capacity once the sulphide plant is commissioned – an increase to 35 000 tpm from the current 20 000 tpm. The grade is expected to increase from 2.5 g/t to 3.5 g/t.

“With just over 3 Moz of gold resource declared at Pickstone-Peerless so far, we expect the resource to comfortably see us through the next +20 years of mining,” says Prelea.

“Should we intend to increase our rate of production or mine life, the resource is open at depth and along strike, so there is scope to do more if we like,” he adds.

Alongside these operational expansions, the success at Pickstone-Peerless has prompted the reappraisal and potential redevelopment of the nearby Giant gold mine, which has a JORC-compliant inferred resource of 500 00 oz of gold.

Historically, Giant was a significant producer and like Pickstone-Peerless it is believed that a world-class resource could be delineated at this mine, offering further upside potential in Zimbabwe. Located just 30 km from the Pickstone Peerless mining operation, the presence of artisanal miners on site at Giant is a sure sign that there is lots of gold in the area, Prelea notes.

Preparing to begin an evaluation programme soon, the geologists involved in the exploration are confident that a substantial resource could be defined and that another Pickstone-Peerless-sized mine could be established at Giant, should the exploration prove fruitful.

Moving forward, expansion remains a core pillar of Vast Resources’ strategy and new projects and opportunities in both jurisdictions will continue to be assessed, but expansion to new opportunities will be only be advanced if it can be demonstrated that it will not impact current projects or overall performance.

“Because we have valuable intellectual property in both Zimbabwe and Romania we can leverage off our experience at a time when both countries are going through exciting changes and while the assets are still economically beneficial,” Prelea notes.

“With our two operating mines, our objective is to bring our next two mines – one in Zimbabwe and one in Romania – into production as soon as possible.