Water Management and the Mining Industry

The two biggest areas of water management concerns for mines are the challenges of avoiding discharges of contaminated water, and water scarcity in dry areas.

Mines cannot ignore these challenges. In the one case, a lack of water availability could prevent new projects from being implemented. This is possible in South Africa on the Eastern Limb of the Bushveld Complex should the necessary water supply infrastructure not be developed. In the other case, the introduction of the Water Act (36 of 1998) in South Africa requires mines to focus on water management. In particular, regulation 704 of this Act implemented in 2001/02, requires water contaminated by mine usage to be contained and reused.

“A decade ago mine shafts and mines did not seriously attempt to capture water,” partner at SRK Consulting, Peter Shepherd, who is a hydrologist, says. “The mining industry in South Africa is now embarking upon the learning curve in this type of water management. Mines on the Eastern Limb are typically using or trying to use no more than 1,000 litres of water per tonne of ore mined, and the ideal would be to achieve 200 litres of water per tonne mined.”

The rapidly developing Eastern Limb, which incorporates Polokwane and Burgersfort, and where some 12 platinum mines operate, highlights the matter of water scarcity, but mines across the rest of the continent have to deal with the same issue. 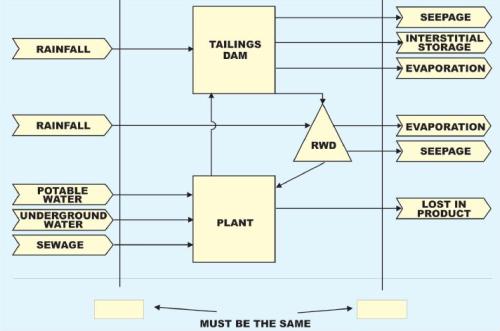 On the Eastern Limb it is envisaged that the additional water will be supplied from the Olifants River, with an increase in the height of the Arabie Dam. The proposed construction of a new dam in an environmentally sensitive area upstream of the Kruger National Park on the Steelpoort River would also help alleviate water needs.

“Billions of rand will have to be put into projects to supply the mines with enough water in the future. Mines in the Eastern Limb are managing at present, but we will have to continue reassessing where water is available and how we will transfer it to the mines.” Such projects will also supply local communities and are necessary as no major water supply schemes exist north of Pretoria. All the towns in those areas undertake their own water treatment.

Shepherd admits that achieving an ideal of only 200 litres of water used per tonne of ore mined will not be easy. In a typical operation some 35% – 45% of the water discharged to the tailings dam is reused back in the process plant while 25% of the water typically remains in the tailings dam. Some 5% of a mine’s total water usage is due to seepage losses from tailings dams and other process water infrastructure, while up to 35% of the mine’s water intake can be lost to evaporation. “Here the biggest culprit of water loss on a mine is the tailings dam and the way to reduce evaporation is by minimising the deposit area,” Shepherd says. “However, doing so with existing tailings dams is not easy.”

The best option in avoiding evaporation lies in having the return water dam split into two compartments, with a small surface area dam used for collecting the recycled processing water. The other compartment is kept mostly dry and used to collect incidental water from rainfall.

Shepherd feels that mines miss an opportunity when during rainfall periods their water storage dams fill up and spill over. “Mines should have the capacity to store water generated from a one in fifty year storm. Rainfall should be seen as a cheap, virtually free, source of water.” 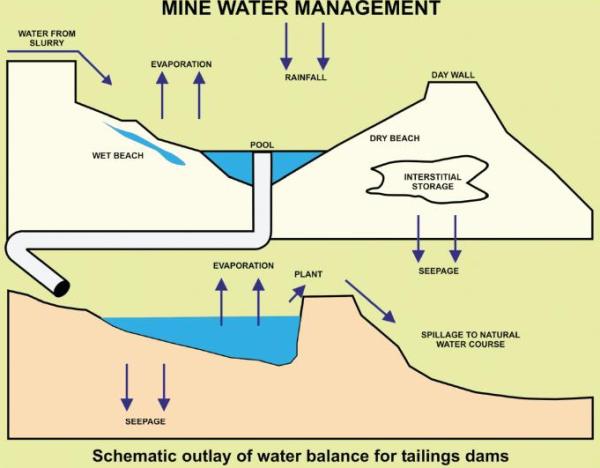 New mines are being designed and built to have a smaller footprint so as to minimise the amount of dirty water that needs to be collected. With new tailings dams, preparation of the ground beforehand to drain and collect water for reuse can help. So can maintenance to reduce seepage from pipes, which can account for 50 million litres a month for a mine using one billion litres a month. Other measures that can be taken include the use of sewage water for non-potable applications. “However, such water needs filtration to remove solids and elements that cause erosion of equipment and vessels. This comes at a cost which five years ago mining companies would not have contemplated. The main reason is that the potential effect of this water on recovery rates far outweighs any costs associated with obtaining new water and releasing water into the environment.” 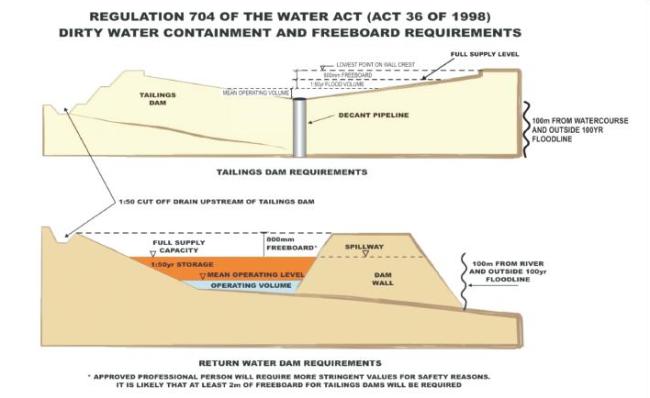 Regulation 704 of the Water Act (Act 36 of 1998) dirty water containment and freeboard requirements.

Containment and isolation from the environment of the dirty water used in the mining cycle is perhaps the biggest water management challenge mines face. “Mines in South Africa have only recently begun to contain their dirty water and face a learning curve as to how to deal with the impacts. Over time the levels of brine in this water will build up within their enclosed water systems,” Shepherd says. He estimates that the total dissolved solids (TDS) in a process water dam can be as high as 4,000 parts per million (ppm) and this could increase by about 15 ppm a month. “Over time the management of this water will become an increasingly significant issue.”

One of the leaders in water management is the Rossing uranium mine in Namibia which, due to its arid setting, has been reusing water for a long time. It has already reached the point where its contained water is at 60,000 ppm TDS, this being twice the salinity of the ocean. In other dry areas like Botswana mines such as Orapa have undertaken audits to measure water loss. Orapa found it lost some 10% to 15% of its water through its infrastructure and has put plans in place to fix this.

Mines in places such as the DRC face a different and ultimately bigger challenge. Containment of process and other dirty water from the mining process is particularly difficult in regions with high water levels. The upside at the moment is that the water discharged by mines in such areas is absorbed into the water system without a noticeable change in the water balance a kilometre or two downstream, but this is not a sustainable solution.

A mine plant for containing and treating mine water will not come at a cost of less than R30 million and will probably reach at least R100 million, though it can be phased in. To demonstrate the progress in how this issue is being dealt with a consortium of coal mining companies, including major mining companies such as Anglo Coal, last year combined resources to set up a water treatment plant near Witbank. The plant will treat some 30 to 40 million litres a day.

At the moment, in South Africa, and certainly in other parts of the continent, the monitoring of the water balance is not enforced with the application of penalties. The regulators rely on mines doing self audits to ensure they achieve the requirements of regulation 704, as they lack the capacity to enforce these regulations. However, Shepherd says most large mining groups are trying to adhere, in part because they know it will become more of an issue as time progresses and the measures required to maintain this water balance cannot be implemented overnight. They take a year to put in place and the risk of having a mine shut down while such remedial action is taken by far outweighs the cost of implementation.

It is also part of the global awareness of how the mining industry affects the environment, and mines realise the importance of being seen to undertake water management in a manner that befits a good corporate citizen. Any perceptions that mining companies are lax in managing the environmental impacts of their activities will lead to extreme social pressures upon such operations.