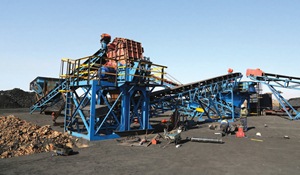 Once a small coal trading business, JSE-listed Wescoal continues to transform itself, today resembling a significantly greater entity than it was in 2009 when it acquired Khanyisa, its first coal operation. 2014 has reaped great successes, thanks to the acquisition of the Elandspruit property in particular which will double the company’s annual coal output from 2 to 4 Mt by 2016, writes Laura Cornish.

Mining success stories are few and far between at present as commodity prices remain extremely weak. Wescoal appears to be defying the odds in the coal sector and has positioned itself on a growth path trajectory set to double its production in just two years.

At 4 Mtpa of coal, the company will retain its junior position. However, its ability to increase its revenue by 92% over the last six months (of its financial year to March), extend its current operation’s lifespans, acquire major production-enhancing assets and conclude a BEE deal as outlined by Eskom undoubtedly positions it as a leading junior. Its acquisition of MacPhail late in 2013 has elevated the trading business arm substantially as well.

ELANDSPRUIT SEALS THE 4 MTPA DEAL
Situated 10 km west of Middelburg in Mpumalanga next door to Shanduka’s Graspan colliery, the Elandspruit property will be considered Wescoal’s flagship asset once in operation. This is largely because it offers a 27 Mt resource and 12 to 15 year lifespan, which at present is substantially longer than both operating mines Khanyisa and Intibane. Wescoal acquired the asset from Glencore Xstrata – along with all necessary legislative requirements including Section 11 of the MPRDA, surface and mining rights, etc. “Only our water use licence remains outstanding, which we are certain will be awarded imminently,” says CEO André Boje. 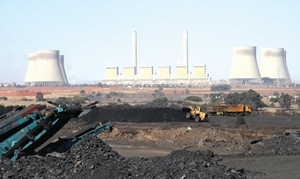 With a water licence in hand, Wescoal will move the open pit Elandspruit swiftly into production, which at this point in time is planned for early 2015. “We can fast-track this project because we have already secured a R200 million funding facility from Investec Bank to develop the mine,” Boje outlines.

“Our R40 million acquisition of the nearby (18 km) Muhanga coal processing plant, purchased specifically to wash Elandspruit’s coal, is ready and waiting.” Boje does have plans to upgrade the plant and expand its capacity from 140 000 tpm to 200 000 tpm (ROM). The company has also issued opencast mining contract tenders to ensure a smooth mining start-up.

Impressively, Wescoal is in the process of securing its primary (50% production) Elandspruit coal buyer, Eskom. This is thanks to the proposed 50.1%-owned and black controlled special purpose vehicle it is establishing this year. By meeting the state utility’s required BEE legislation, the purchase of produced coal – at a premium – is a given. The plan is to sell the remaining production to high-end domestic buyers. “We have to supply coal to Eskom; as a local strategic mineral it is critical to do so. I have no problem or issue with the situation but I won’t get fully into bed with them either.”

MAXIMISING WHAT WE’VE GOT
Producing approximately 1 Mpta of coal each, Khanyisa and Intibane each have an important role to play in ensuring Wescoal reaches its 4 Mtpa target. “At this stage both operations have limited lifespans however. This means we need to find replacement tonnages sooner rather than later and as such we are already on the lookout for an asset ready for production in 2017. Since we have sufficient processing (and trading) capacity, it does not necessarily have to be an operating mine,” Boje explains.

Khanyisa has approximately 12 – 18 months of lifespan left, longer than originally anticipated thanks to an initiative largely involving pillar mining and extraction. Boje says Wescoal is in negotiations to acquire additional coal properties in the area and expand the mine’s life well beyond the next 18 months however. “There is coal in abundance around Khanyisa: enough to extend this mine’s life to between 10 and 12 years at least.”

At Intibane Wescoal has embarked on a Phase 2 project that entailed the acquisition of an area adjacent to the mine, which extends its life by 2.25 Mt to March 2017. At present the mine has 0.82 Mt remaining (gross in situ). A replacement project for this mine is therefore critical to maintaining the 4 Mtpa production target once it is reached.

Wescoal has been undeniably active over the 2014 period, announcing acquisitions and concluding deals which strategically benefit its production and processing goals in the short and mediumterm. Few juniors can boast similar levels of activity over the year in the current economic climate or are equally as confident of hitting forecast growth targets.

This article was featured in Mining Review Africa magazine, edition 12, 2014.