Why potash in Ethiopia

One of the reasons Toronto venture capital exchange listed junior Allana Resources has chosen Ethiopia to develop a potash project is based on geological criteria. Ethiopia hosts a major evaporative basin, comparable to those of Canada and Russia which dominate global potash production. 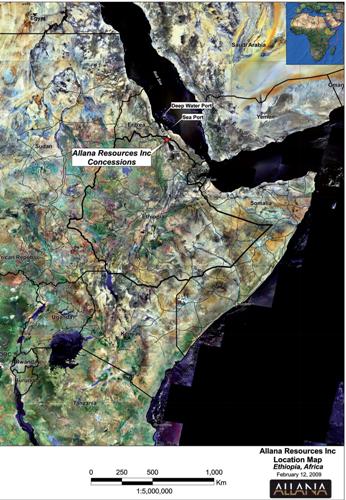 Global potash supply is dominated by three major producers in Saskatchewan, Canada, and three in Russia and the former Soviet Union. Much of the remainder is sourced from the Dead Sea, South America, US, China and other regions. In 2007, the global demand for fertiliser totalled 195 million tonnes, with up to a quarter of this attributed to potassium-based fertilisers (i.e. potash).

Allana Resources, which holds three concessions in Ethiopia’s north-eastern Danakil Depression, covering 150 km2 is hoping to become part of the global potash dynamic. “Of the three major comparable evaporative basins hosting large potash deposits, only the one in Ethiopia is not a producer,” president and CEO of Allana Resources, Farhad Abasov says. 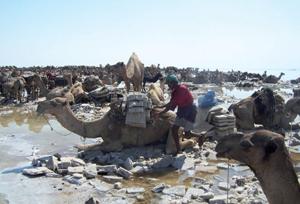 Artisanal salt mining in the region where Allana Resources is looking to develop its Dallol potash project.

The area, located some 100 km from the Red Sea coast and the port of Mersa Fatma in Eritrea and 600 km via road from Djibouti’s deep water port, has been mined intermittently during the past century. It was exploited on a small scale in the 1920s by the Italians. Between 1958 and 1967, the US based Parsons potash company drilled nearly 300 holes costing about US$70 to US$80 million and sank a shaft to conduct underground mining.

The shaft sunk in about 1965 was flooded and a few years later the company gave up. Knowledge of solution mining did not exist then.

Apart from Allana Resources, mining companies currently working in the Danakil basin area include BHP Billiton and Sainik Coal Mining, a leading Indian-based coal mining company, which is planning to mine the Musley deposit.

Allana has completed a NI 43-101 compliant technical report for its three concessions in Ethiopia, with an inferred resource of 105 million tonnes of potash mineralisation. This comprises sylvite and kainite with a composite grade of 20.8% KCI.

Allana’s deposit has a depth below surface of 50 to 100 metres in the western portion, and dips to 700 to 800 metres in depth to the east. This opens up the potential for both open pit and solution mining. In comparison, the deposits in Saskatchewan, where the depths range between 1,500 and 2,000 metres, and Russia, where they range from 1,800 to 2,000 metres, entail solution and underground mining.

Geothermal hot springs at Dallol, which could potentially help source energy for the Allana project.

Potash mining and production can be time and capital intensive, due to the location of many potash deposits. Potash is formed by the evaporation of sea and the compression of the evaporated minerals by sediment layers over time. As a result, potash is often found in deep underground deposits.

Despite the depth at which many potash deposits are found, they are economical because of strong demand.

“Ethiopia is particularly attractive because the capital and operating expenditure will be lower, with lower labour and energy costs,” Abasov says. “Labour in Ethiopia is about 20 times cheaper than that in Saskatchewan, and being a desert there is all-day sunlight for about 360 days a year.”

Energy makes up some 30% to 40% of a typical potash solution mining operation’s cost. Potash is often mined by dissolving it in water, and pumping to a crystallisation facility where it is separated from the water. It is an energy intensive process because of the use of energy to heat the water, and Allana proposes the use of solar evaporation and geothermal power to allow for low cost production.

Sourcing water is not expected to be a problem, as Abasov says there is a lot of underground water in the area.

Landscape where the original Parsons potash operation existed and where Allana Resources now holds the concessions which it plans to develop.

The plan is to look at a one to two million tonne a year potash operation, initially. The data used for the scoping study are only based on 10% of the property, and the plant would no doubt be a modular one.

There are three ways in which the deposit could be mined; underground, open pit, or solution mining. The latter is seen as the best option; the first two are seen as expensive in comparison.

During the first quarter of 2009, Allana Resources completed its initial reconnaissance exploration programme on the project in the Danakil Depression. This focused on structural mapping of the salt domes in the centre of the basin, structural mapping of the west side of the Danakil graben as well as sampling of geothermal hot springs to determine the chemistry of the brines.

Structural mapping of the salt domes concentrated on Dallol Mountain and Ashe Ale. Data suggests Dallol has an intrusive source at depth that may be generating the hydrothermal system and causing doming of the overlying salt layers. Ashe Ale is interpreted as a small diapir and may consist of salt from the lowest part of the stratigraphic section. Possible potash layers may have been dragged to the surface with the dome, but more work including drilling is required to confirm this interpretation.

The Dallol deposit features three layers, one of sylvite, an intermediate carnallite layer and a kainite layer, omitted by earlier reports on the deposit. “It is rare for a deposit to have both. With the kainite allowing us to produce sulphate of potash (SOP), a premium product, this offers another advantage to the Dallol project.”

The original Jenson shaft established to mine potash by Parsons during the 1960s.

In the next phase, Allana will undertake some 1,500 metres of diamond drilling, down hole seismic and 2Dseismic surface studies. This is taking place during the remainder of 2009. The programme, which involves the drilling of five to six holes, will cost some US$2 to US$3 million, including the down-hole seismic studies. Allana is engaging local geologists to undertake the seismic and drilling work, with these supervised by Canadian or European consultants.

Allana describes infrastructure standards in Ethiopia as good, with the country’s power facilities including nine hydroelectric plants as well as promising geothermal energy resources. There is an expanding road network, and education levels are high in Ethiopia.

The government has started paving the 300 km road to the Dallol property, having engaged a Chinese company to undertake this, and Abasov says there is likely to be strong support for the project. He says Allana had productive discussions with Ethiopia’s minister of transportation and other key ministers regarding expanded infrastructure and transportation routes.

With a distance of only some 100 km to the coast, Dallol is well located. In comparison, in a place like Saskatchewan there is no spare rail and ports capacity for major expansions.

Obviously it would make commercial sense to transport the material from Ethiopia across the border to Eritrea. It would be ideal if this could overcome any political tensions between the two countries, but should that be difficult, then Djibouti would be the alternative export route, with the potash trucked there. “There is no entrenched animosity between the people of Ethiopia and Eritrea but rather qualitative differences in opinion between the two countries,” Abasov suggests.

Abasov says that development of the project could see it in production in five to seven years, nonetheless, in spite of such a likely lead time, it remains one of the more advanced potash prospects around the world. “There are expected to be no major environmental constraints. It is a desert, with almost no flora and fauna and no villagers to be disturbed or moved.”

Ethiopia’s mining code is well defined, with three types of licences awarded. One is a year long prospecting licence, during which time a company must pinpoint the area of exploration it wishes to focus on. Then there is a three year exploration licence, which can be extended by a year, twice, during which time a company has to locate an area that it would consider for mining. The third type of licence is the mining licence, which gives the developer 20 years to build the mine.

Abasov says there has been interest from China and other countries in terms of financing and joint venturing the project. Several mining and fertiliser groups have engaged Allana in discussions regarding a potential joint venture. The company will look for niches, where it can work with strategic partners who can contribute most to the rapid development of the Dallol potash project.

With the strong long-term demand for potash, Abasov believes there is space for other producers, taking into account that, “All major mining companies that do not have potash operations are either planning to or have already entered the potash sector.”