WHY TEAL IS NOT JUST AN AVERAGE JUNIOR

One of these is the depth of history it has in the areas where it operates. TEAL, once the African exploration arm of Avmin, is now 65% owned by African Rainbow Minerals (ARM) and this legacy means that for many years it has had people and offices in two of the three countries where it has exploration projects, Zambia and Namibia, while the Zambian office also served TEAL’s activities in the Democratic Republic of Congo (DRC). In addition to its association with a mining group that has long operating knowledge of these regions, it also offers genuine country as well as precious and base metal risk diversification. It has invested significant exploration resources on projects covering gold, zinc, nickel and copper in those countries.

TEAL missed the opportunity that a group such as First Quantum Minerals took of building itself during a counter cyclic period, but it has a degree of early mover status in that it has been able to choose its ground well, having been in those regions in the form of Avmin for a long time. As a result it is not searching out ground at a market peak, having kept its holdings since the bottom of the cycle. TEAL was formed to allow a greater focus on the exploration and feasibility projects it has by ARM, as the latter has a strong portfolio of its own development projects in South Africa.

TEAL Exploration & Mining vice president investor relations and corporate development Julian Gwillim says, “For TEAL’s assets which are at the early development stage the TSX is the ideal market as there are some 50 analysts, across the TSX mining sphere, that follow mining and exploration companies and there is a good history of understanding the nature of such businesses.”

TEAL listed in November 2005 on the TSX – it has a secondary listing on South Africa’s Johannesburg Stock Exchange – and raised US$34 million that it is spending on its various projects over the next two years. Four of these projects may lead to final feasibility or go-ahead decisions within the next two years.

Of these four fairly advanced stage projects, the Konkola North project stands out. TEAL is doing a feasibility study on Konkola North, which is essentially the third of the Konkola orebody not held by Vedanta. TEAL’s portion of this orebody is the top third closest to, and in one area touching, the DRC border. The company originally obtained this ground as part of a ZCCM privatisation package in the 1990s. Konkola North has an existing shaft system that accesses the northern sector of this deposit with that portion divided into the South limb, which outcrops to surface, and the high grade shallow East limb. These together have an inferred resource of 78.8 million tonnes at a grade of 2.14% copper for 3.7 billion pounds of copper.

The shaft extends to a depth of 423 metres and this orebody was mined by Anglo American prior to nationalisation in the 1970s. The Konkola North deposit has a larger Area A and Area A extension with a historical resource estimate of 170 million tonnes at 2.88% copper for 10.8 million pounds of copper, and TEAL has been undertaking a geological investigation of this. TEAL is planning to spend some US$4 million on the Konkola project over the next year.

Konkola North’s South and East limb could have an estimated mine capacity of 40,000 tonnes of copper a year, but for a faster track route to production there is TEAL’s Mwambashi project near Kitwe in Zambia with a likely production capacity of 12,000 tonnes a year. This project would be an open pit operation with toll concentration and can be brought into production for a cost to build the mine and a road of US$5 to 6 million. A decision will be made on the go-ahead in August 2006 and the mine could start production as early as next year. Mwambashi has indicated resources of 8.6 million tonnes at 2.43% copper for 461 million pounds of contained copper. This resource is expected to be upgraded soon.

TEAL geologists at its Kalumines
property in the DRC.

Exploration drilling at the
Otjikoto gold project
in Namibia.

TEAL’s fourth project takes TEAL geologists at its Kalumines property in the DRC. it away from the copper belt to Namibia and away from base metals to gold. The Otjikoto gold project, located north of Windhoek, is part of a ground holding of 3,000 km2, and originally belonged to the company through its search for base metals.

“There is a large calcrete crust and in the past the region was not explored for gold, but we have nearly one million ounces in resource at 1.13 g/t and believe we could eventually have an open pitable resource that is 150 to 165 metres deep and could result in a mine similar to that of AngloGold Ashanti’s Navachab mine,” Gwillim says. Otjikoto is only one of many targets on the property and further exploration could potentially identify further gold orebodies.

Additional drilling at Otjikoto is anticipated to lead to a resource extension announcement by the end of this year and the go-ahead of a full feasibility study. TEAL is to spend some US$4 million on the project over the next year, and of benefit to the project is that the team working in Namibia has been involved with that project since the late-1990s. 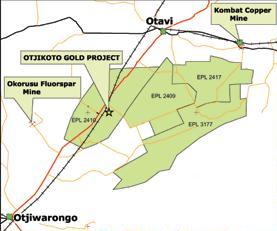 TEAL is also involved in some early stage exploration projects, in particular the Copperbelt joint venture with Korea Zinc, which has a 30% interest. This covers 2,800 km2 in the Chipopo area of the Copperbelt and TEAL is investing US$2 million over the next year on exploration for copper gold mineralisation. High priority targets include Chipopo where drilling is underway, Samba and Mwambashi A where drilling will also be undertaken. MSA Geoservices has done a review of the project and low priority targets will be joint ventured with other junior exploration companies as TEAL rationalises its landholding. TEAL is also involved in a joint venture with BHP Billiton known as the Kafue joint venture, with TEAL holding a 51% share and BHP Billiton 49%. TEAL is spending some US$2 million over the next year on this early stage exploration project covering an area of 2,200 km2. This property covers a portion of the east African nickel belt identified by Albidon and the joint venture is targeting zinc, copper and nickel. Gravity surveys have been done using BHP Billiton’s Falcon™ technology and some interesting anomalies have been generated, particularly related to zinc and nickel. Drilling is underway at present on this licence area to follow-up on these Falcon™ and soil geochemical targets.