In 2009 Petra Diamonds reshuffled its African activities, withdrawing from Angola and scaling down in Sierra Leone and Botswana. Instead, the company is planning a more than three-fold increase in production at its newly-acquired Williamson diamond mine in Tanzania.

This is the new strategy for the company’s operations outside South Africa, as mapped out by CEO Johan Dippenaar in an interview with Mining Review Africa.

Sunset at the pit at Williamson
diamond mine

In South Africa, Petra has five producing mines – Cullinan, Koffiefontein, Helam, Sedibeng and Star, plus Kimberley Underground Mines. “In Tanzania we acquired a 75% interest in the Williamson diamond mine, with the Tanzanian government holding the other 25%,” he says.

“We withdrew completely from the Alto Cuilo project in Angola. At our Kono project in Sierra Leone our joint venture partner Stellar Diamonds has taken management control, and put the project on care and maintenance to wait for the market to change.

“In Botswana we are continuing with reduced exploration work at our Kalahari Diamonds project,” Dippenaar explains.

Aerial view of plant at Alto Cuilo,
the Angolan project from which
Petra has withdrawn

“Diamond exploration has again proven to be extremely tough, but we still believe that the Angola and the DRC regions have great potential,” Dippenaar says. “When things pick up and we are generating some surplus cash flows, our first priority would be the Botswana project, which has great potential, but we would also consider other exploration projects at that time,” he says.

“If you think of the hundreds of millions of dollars that have been spent on diamond exploration, and the low level of success achieved, together with the severe decline we had in prices, it is difficult to imagine that companies will shell out huge amounts of money on exploration in the near future. I think that for the medium to longer term we will move towards an extremely tight supply of diamonds to international markets,” he adds.

“Even if someone announces a big find today, it will still take seven or eight years to bring it into production, and in that period a lot more of the current operations will be winding down.

Against this background, Petra remains one of the largest independent diamond groups in terms of resources with a resource base of over 265 million carats worth US$27.3 billion. “And this resource covers our existing operating mines. All involve hard rock mines that have seen uninterrupted production of 50 years plus, and have proven economic mining histories. There is no doubt that these are economically minable deposits.”

Petra’s newest mine is the Williamson diamond mine, an open pit operation at Mwadui in the Shinyanga province of northern Tanzania. “We paid De Beers US$10 million dollars and, having taken it over as a going concern, we assumed all the operating and environmental responsibility and liabilities,” Dippenaar explains. “The deposit is huge. It covers 146 hectares, and is the largest kimberlite pipe ever mined economically anywhere in the world. The mine has produced 20 million carats over the past 70 years.”

The Williamson resource has been calculated at 40 million carats. “Although it is a low-grade deposit, it regularly produces large, high quality stones, and is a source of rare and extremely valuable fancy pink diamonds,” Dippenaar says.

“Production over the last year or two has been about 135,000 to 160,000 carats a year,” he says. “We are still consolidating what we have, and intend to build up production to 180,000 carats a year over the next year. This is an orebody that lends itself to scalability, and life of mine is huge,” he points out.

“Once we have operated for a year to 18 months we will have established the new economics in terms of volume of production, cost per tonne and value per carat.

Armed with these three factors, we will be in a position to determine an optimum business model.” 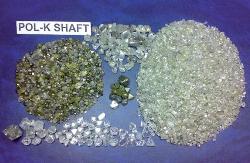 Even at this early stage, the medium to longterm prospects for the mine are exciting. “We are thinking of taking Williamson well above the current 1.6 to 2.0 million tonne per annum (mtpa) operation. It is a huge open orebody that one can mine on surface, and our belief is that this is typically a project one would want to operate at 7.5 to 10 mtpa,” Dippenaar says, “and then you will typically produce in excess of 500,000 carats a year – more than three times current production.

“We hope to put a plan like this in place within the next six to twelve months. It will then take up to three years to install the required infrastructure to run the operation at that level. The mine as it stands has pretty good infrastructure, but it will require a new mill and plant,” he says. “We could be in production in, say, mid-2013, and we would be starting a 30 to 40-year mine life producing 500,000 carats a year.”

“Our very early estimates suggest that it could cost up to between US$30 and US$40 million,” Dippenaar says.

Speaking in more general terms, Dippenaar expresses the view that the medium to long-term outlook for diamonds is extremely exciting.

A truck-load of ore leaves the
Williamson mine, moving through
a picturesque setting

“For Petra, with our current portfolio of assets in South Africa, Tanzania, Botswana and Sierra Leone, we will be able to provide substantial growth for years to come without having to make any acquisitions,” Dippenaar observes. “As an example, we have 300 million tonnes of tailings material at Cullinan, Koffiefontein, Kimberley Underground and Williamson, and that in itself is a huge resource that could be exploited in future.

“Another big positive, apart from the supply situation, is on the demand side, where the world market is growing in terms of the numbers of middle class people becoming consumers at a rapid rate – especially in India and China. These people will be buying diamond jewellery just as people in the West do, so we see an exciting future for our industry.”