Zest to open office in Ghana

Motors and electrical equipment and technology group Zest is poised to open an office in Accra, Ghana, the company’s first such move outside South Africa. 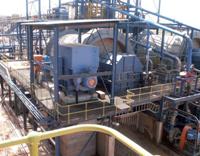 The Ghana office will trade under Zest Electrical Group Ghana Ltd, and the group which has been supplying electric motors to the mining sector since the 1980s has appointed Jose Miguel to run that office. Miguel is experienced in African operations, having been based in countries such as Angola, Mozambique, Lesotho and Swaziland over his career to date.

“We understand that some 60% of the installed base of electric motors in Ghana are units supplied by us, and having been particularly successful in that region with a large end user base, we feel it is right to set up an office to serve those customers,” Zest managing director Louis Meiring tells Mining Review Africa.

The office in Ghana, which takes into account the presence of major mining groups operating in the region such as Gold Fields, AngloGold Ashanti, Newmont and others, will also serve neighbouring West African countries, including Mali, Mauritania, Cote d’Ivoire, etc. The company also sees a lot of potential in the oil and gas industry in that region.

“Our installed base is growing rapidly, which also takes into account our expanded product range,” Meiring says. “West Africa accounts for some 7% to 8% of our total market and we have seen phenomenal growth there.” The company’s subsidiary EnI, which it recently took over, already has an office in Ghana, and that allows for some effective synergies. “We will continue with that office for now and our next step is to consolidate,” Meiring says.

“End users in the region have said they need help in two areas in particular; training and technical support and our establishing an office there facilitates this.” The company will also invest in ensuring stock is available that can be supplied rapidly to operators in the region.

Zest will spend R4 million initially on setting up the office. It will have an initial staff of some 10 people as the group plans to start small and emulate the approach taken with success in South Africa. Miguel says that the West African company may identify good distributors to work within the region, following the model Zest already uses. This includes managing its own logistics, having its own vehicles and not relying on contractors.

The move also takes into account that Zest has captured a large share of the South African market and further growth in that country won’t be easy.

However, Meiring says that regions such as Tanzania are not yet on the company’s radar for similar initiatives. “We have used a network of agents, and that has been successful in servicing our markets across Africa thus far, and in other regions we will continue with that approach. An example is Zambia where we have a solid agent in place.”

In fact if there is to be another office established outside South Africa, Meiring has identified Zimbabwe as the most likely possibility. “We have a strong installed base in that country and Zimbabwe will turn around. When it does we want to be there directly.”