The Zimbabwe operations of Impala Platinum Holdings (Implats) – the second largest producer of platinum group metals in the world, supplying approximately 25% of global platinum output – could become a focal point in future development.

“We have always been very happy with Zimbabwe,” Implats CEO David Brown says. “It has pleasantly surprised us that, despite the economic and social turmoil there, our teams have managed to deliver against budget and targets for the last eight years.”

The two Implats mines in Zimbabwe, Zimplats and Mimosa, had an excellent 2009 financial year from a production perspective. “Virtually all production and expansion targets were met, costs are being well managed despite the dollarisation of the economy, and a good safety record was set at Zimplats,” he adds.

“Future growth at Zimplats depends on economic and political stability in Zimbabwe. Various expansion options are being investigated, and could involve the development of underground mines, another concentrator and a new smelter,” he reveals.

“Given the right market conditions, Zimplats with its reserves and easy underground access, has the potential to become a one million ounce a year platinum producer.”

While overall group production declined by 11% in the 2009 financial year, and costs rose by 32%, both of the company’s Zimbabwean operations more than held their own.

“Zimplats, while remaining a leader in the group in terms of safety, showed a slight increase in production of platinum in matte year-on-year to 96,000 oz, as the operation geared itself for a major ramp-up in production from the Phase One expansion in the 2010 financial year.

“This expansion will double output, adding another 80 to 90,000 oz in 2010. That’s where the bulk of our growth will be coming from,” Brown emphasises. “Once this is achieved, Zimplats will become one of the lower cost platinum producers in the world.”

The new concentrator at Zimplats’
Ngezi mine in Zimbabwe

The US$340 million Phase One expansion, which involves the development of two underground mines (Portal 1 and Portal 4), a new concentrator and other infrastructure, is on track. Surface construction is completed, Portal 1 is at full production and Portal 4 is still being ramped up.

“We have built up a stockpile of some 800,000 tonnes which we are now processing until we reach full production from underground,” he explains. “This will involve 1.0 million tonnes per annum (mtpa) each from Portals 1 and 2, and 2.0 mtpa from Portal 4. Total throughput will eventually be 4.2 mtpa, and steady state output of 180,000 oz pa will be achieved from 2010,” he says.

“Looking ahead, the next development phase at Zimplats could be for another 100,000 ounces a year, followed by future modules of 100,000 to 150,000 oz,” Brown predicts. But he hastens to point out that subsequent modules would involve a significant amount of capital in terms of the surface infrastructure. “We are busy looking at the possibilities, but it is far too early to quote any figures. It would certainly involve a significant investment,” he continues.

“Our jointly operated Zimbabwean operation with Aquarius Platinum, Mimosa, showed a 21% increase in tonnes milled to 2.1 million tonnes, and production of platinum in our 2009 financial year rose 19% to 91,500 ounces,” Brown says. “The next expansion phase, which will lift production to about 100,000 ounces a year, is complete, and we should achieve that kind of production on an annualised basis by the end of the 2010 financial year next June.”

“While we have gleaned a lot of positives and a lot of confidence from our Zimbabwean operations, the downside for me still is that, while there have been some very positive statements from government officials, and I think that they are trying very hard to improve the investment climate, there are some issues, and from a Zimplats point of view some specific issues, that need close attention,” he points out.

Spectacular shot of Impala’s
Marula mine at night

“One of these is obviously the Additional Profits Tax that we are being charged and from which, according to letters we had from the minister of mines at the time we invested, we should have been exempt. These niggly things are proving to be little pebbles in the road at the moment. I am hoping that between now and early next year we can resolve these issues, because quite clearly it would be positive to look at another expansion phase in Zimbabwe early next year,” Brown insists.

Reverting to group performance, a difficult and challenging 2009 financial year, exacerbated by the global economic crisis, led to Implats revenues dropping by 31%, headline earnings per share decreasing by 52%, profits falling 47%, production declining by 11% and costs increasing by 32%.

“It is clear that operating profits will be down quite significantly again in the current financial year,” Brown says.

“This is why we re-adjusted our vigorous growth strategy this time last year, shifting the focus from significant growth to cash preservation. The key Leeuwkop and Marula Merensky projects, worth a combined R10 billion, were deferred,” he says. “They were only going to deliver long-dated ounces, and we took a decision that there was no point in spending cash today for ounces that are only going to deliver in eight or nine years’ time.

“The next 12 months is probably going to be our toughest year for over a decade, with a strong rand/dollar exchange rate, and metal prices that are not necessarily going anywhere,” he says.

“Until June 2010 we need to work on the basis that nothing special will happen in terms of external factors, so we need to look after ourselves, and that means right-sizing the business,” he adds.

“Essentially we are looking at costs, and of our cost increase in FY 2009 two thirds could be attributed to inflation and one third was lower volumes. The good thing about it is that we know what the issues are, and we know what to do to fix them, so we know what plans to put in place. We have to spend the next 18 to 24 months getting our development rates up to the right level, which will allow us to mine what we believe is an optimum level of one million ounces a year at Impala Rustenburg alone.”

He estimates that Implats will be cash-negative after capital expenditure till towards the end of 2011. “The issue for us is to ensure that from now till then we are clear on what cash resource we have, which includes borrowing facilities,” Brown believes.

“A number of our peer group have raised equities to fill that gap, but I prefer handling this issue via debt. I believe that, even looking to June 2011 and taking into account conservative pricing and a stronger rand, we have sufficient resource to carry us through.”

Turning to production, Brown is of the opinion that the original Implats guidance of 1.8 million ounces of platinum will not be achieved in the current financial year. “Quite clearly the 14 Shaft tragedy in July and subsequent revision of the mechanised mine layout will have an impact of some 50.000 oz, and the two-week industrial action in August will have a similar impact. We will probably be closer to 1.7 million ounces again,” he estimates. 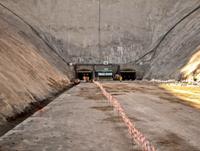 The approach to Portal 4 at
Ngezi mine

“This is obviously very disappointing, particularly when you have both significant events, the accident and the strike, in the first six weeks of your new financial year,” Brown admits. “It makes things extremely difficult, and quite clearly the challenge for my team and I is to ensure that we hit all the targets from now on and keep people motivated. Our aim is to reach 2.1 million ounces by 2014, and at that level we would be at about 90% of capacity.”

Group capital expenditure for FY 2009 totalled R6.9 billion, compared to the R5.4 billion in the previous year, the bulk of which was spent at Impala Rustenburg on the development of the 16, 17 and 20 new generation, deeper-level shafts.

“Forecast capital expenditure for FY2010 is estimated at R5 billion,” he adds, “and the bulk of this money is allocated to the three shafts at Rustenburg.” Capital expenditure over the next five years will amount to about R21 to R22 billion, which will be managed in line with group profitability and cash flow. “Again, it will largely be spent on the three vertical shafts; 16, 17 and 20,” Brown says.

“There is going to be a lag between improved sentiment and consumer demand, hence a pull-through in additional demand for our commodities will only likely be seen towards the end of FY 2010 next June,” Brown explains.

“Looking forward, there are several organic growth opportunities available to us, and these will be embarked upon as soon as funding constraints abate and the timing is right. The deferred Marula Merensky and Leeuwkop initiatives represent prime examples of what would be growth from our own resources base, and are good examples of organic growth opportunities,” he says.

“We are going to see an improved pricing environment on the back of stronger demand from industrial components as we see the world economies begin to grow again,” Brown predicts. “We are also going to see an improvement in the automotive sector, which will hold a significant key to our success over the next three to five years,” he adds.

“We need to do two things. We must ensure that our production base is stable, and we need to improve our development rates. That will put us back on the right track within the next couple of years, and it will all coincide neatly with increased demand and better pricing,” Brown concludes.