Harare, Zimbabwe — MININGREVIEW.COM — 20 May 2010 – Zimbabwe’s gold production this year is set to double, despite a lack of capital, frequent power cuts and increasing uncertainty over the company ownership law “’ key factors that are combining to stall the sector’s recovery.

Mining has overtaken agriculture as Zimbabwe’s main foreign currency earner after President Robert Mugabe’s seizure of white-owned farms in 2000 triggered the collapse of agriculture in the country.

Under the power-sharing government set up by Mugabe and rival Morgan Tsvangirai “’ who is now prime minister “’ Zimbabwe’s economy has stabilised, and abandoned gold mines have resumed metal production.

Zimbabwean Chamber of Mines president Victor Gapare said that although power cuts and lack of funding had slowed down the recovery of the country’s mines “’ most of which closed in 2008 at the height of Zimbabwe’s economic crisis “’ gold output in 2010 would be significantly higher than last year’s 4.2 tonnes.

“At the moment we are producing at a rate of 7 tonnes … we should produce between 7 and 8 tonnes this year,” Gapare told a news conference here. He said although last week’s strike had hit gold miners hardest, only a quarter of the mines had been affected.

At its peak, Zimbabwe produced about 29 tonnes of gold per year, but hit a record low of just over 3 tonnes in 2008 as mines battled with high inflation and a skewed exchange rate.

But Gapare said the mining industry was unlikely to realise the 40% growth projected by finance minister Tendai Biti in his 2010 budget speech.

“There will be growth in the sector, yes. But not by 40% as the issue of capital shortages threatens growth,” Gapare said. “If the perceived country risk of Zimbabwe comes down, then companies can raise capital easily to expand production,” he pointed out.. 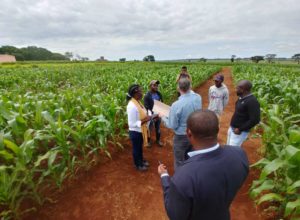