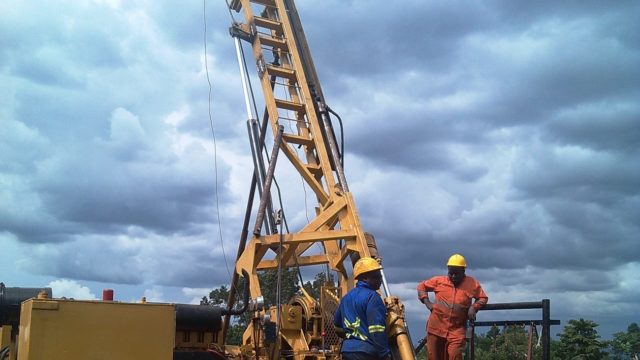 Following recent successes by the regional exploration programs in Burkina Faso and Mali, B2Gold has budgeted US$19.95 million in 2017 for on-going exploration of its West African projects, an increase of $2.65 million over the 2016 budget.

Recent results from the 2016 programmes include:

B2Gold has recently increased the footprint of known mineralisation at the Toega prospect, as part of the Kiaka deposit regional exploration program in Burkina Faso.

In 2016, a total of 19 433 m of combined reverse circulation and diamond drilling was completed, to better define the limits of this discovery and to explore the immediate area for additional mineralisation. Last year’s drilling expanded the known extents of mineralisation at Toega to over 900 m long, by up to 425 m wide, with intersections of variable thickness occurring as deep as 250 m below surface.

Mineralisation remains open down dip and down plunge at Toega. Drilling is on-going. Due to the increased size of the Toega zone, B2Gold now expects to release the initial mineral resource for Toega in the third quarter of 2017.

Gold mineralisation in the Toega zone is hosted by an easterly-dipping metasedimentary sequence, overprinted by shallowly north-east plunging folds. Mineralised intervals in excess of 100 m of core length (e.g. NKRD020, 125 m at 1.66 g/t gold) are localised in a plunging, high-grade “keel” to the mineralisation, which may be related to structural thickening by folding.

A follow-up programme of 5 000 m of diamond drilling is currently underway at Toega, with additional assay results pending.

Based on the positive results to date, B2Gold is undertaking initial mineral resource modeling. Once mineral resource estimates are available, in-house evaluations will commence to determine whether Toega constitutes a potential source of higher-grade feed for the Kiaka deposit or potentially a standalone project.

Metallurgical, environmental and social baseline studies were initiated at Toega in 2016, and these programmes are planned to continue throughout 2017. The 2017 development budget for Toega is $0.84 million.

Further engineering studies were completed in 2016 to assess the optimum throughput rate for the Kiaka project and upgrading projected capital and operating costs.

The current plan is to update the mineral-resource block model later this year based on on-going drilling and then use that model as the basis for additional project evaluation.

This will include re-evaluating project economics and the potential impact of higher-grade ore being added from the Toega zone. The 2017 development budget for Kiaka is approximately $2.7 million.

This near-surface exploration, combined with the planned follow up of FKD_188 at depth (4.60 m at 11.80 g/t gold from 240.10 m is part of an initiative to advance near-term exploration targets that are proximal to existing and planned Fekola mine infrastructure, with the goal of increasing the Fekola mine life.

Within the Fekola region, exploration has defined a significant zone of saprolite-hosted gold mineralisation across two contiguous target areas known as Anaconda and Adder. At present, the footprint of the combined Anaconda-Adder saprolite zone extends over 4.5 km of strike and up to 500 m wide at Anaconda and up to 200 m wide at Adder.

Within these zones, saprolite occurs in flat-lying horizons varying from several metres to over 40 m thick. Mineralised intervals within the saprolite are variable in thickness, but across both zones average approximately 13.5 m in true width.

The Anaconda zone has the potential to be a low-cost operation due to shared infrastructure and services from the nearby Fekola mine; soft “free digging” ore, requiring no drilling and blasting; an unusually low strip ratio; and very low milling requirements, due to the large percentage of fines in the highly-weathered material.

Preliminary in-house estimates indicate that Anaconda could potentially produce between 80 000 and 100 000 ozpa, for several years.

A conceptual engineering study is underway for Anaconda. Fekola capital and operating cost information is being used as a basis for the cost estimates. A base case of 4 Mtpa will be developed, and then larger and smaller cases will be factored depending on the estimated mineral resource.

Metallurgical test programmes have been completed and will form the basis of the design criteria for the processing plant. Environmental and social baseline studies are underway and will continue throughout 2017. The development budget for Anaconda is approximately $2.2 million for 2017.