AIM-quoted Hummingbird Resources has released its review of activities during Q1 2017, noting that first gold production from its Yanfolila mine is on track for year end.

Construction of the 1.2 Mtpa Yanfolila mine is progressing on time and on budget ahead of initial mining targeted in Q3, 2017 and first gold pour by year end. 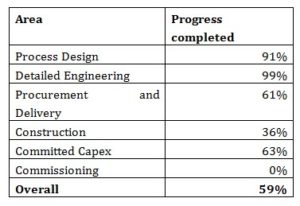 The contract for structural, mechanical, plate work and piping began in January 2017 with IMAGRI under the supervision of SENET. Work on the ball mill is complete and it is due to arrive at Yanfolila during May 2017.

[quote]A fuel supply contract has been signed with Zen Petroleum Mali SA, a well-established West African fuel company, and the foundations of the process plant are largely complete.

The government of Mali will pay Hummingbird Resources approximately US$11 million for an additional 10% stake in Yanfolila. A $60 million debt facility has been entered into with Coris Bank International Group – effectively completing the funding package for Yanfolila and further strengthening Yanfolila’s local content.

“Q1 saw another impressive level of work from the team on the ground, currently numbering 410 people, with the commencement of steel work on site and significant progress across all areas,” says Hummingbird Resources CEO, Dan Betts.

“With the overall project now 60% complete, we are happy with how the Yanfolila construction is shaping up so far; we remain on time and budget to commence production by the end of the year. The arrival of African Mining Services to start work on the tailings storage facility, and subsequently pre-production mining, are significant upcoming milestones as we continue to ramp up development towards production.

“Additionally we are delighted with the refinancing with Coris Bank International in whom we have found a local, supportive, long-term, constructive partner to build the company with. I look forward to the next quarter with great enthusiasm.”

Kevin Moxham joined Hummingbird as general manager for Yanfolila in February 2017. He is a professional engineer with over 30 years’ experience in the effective management and commissioning of mining projects in jurisdictions including Ghana, Eritrea, Tanzania and South Africa.

Moxham was most recently general manager and head of operations at Newmont Golden Ridge where he oversaw the commissioning and production of the 9 Mtpa Akyem gold mine in Ghana.

Prior to this, he was executive general manager at Bisha Mining Share Company in Eritrea where he successfully managed the construction, commissioning and operations at the 1.8 Mtpa gold plant and the 2.4 Mtpa copper plant.

Hummingbird Resources has reviewed all of its exploration potential on its mining permit and has created an outline plan to exploit that potential. Once Yanfolila is in production, the company is looking forward to entering into a more active exploration programme with the specific focus on achieving a 10+ year reserve mine life in the short term.

Currently Hummingbird Resources has been converting to reserves at around a 50% rate so the company looks forward to doing further work on the 1+Moz of resources not currently in reserves as well as other discoveries at a pre-resource stage.

These targets include the Gonka deposit where the results of the scoping study published in early 2016 showed the potential for mining ore at grades of over 4.5 g/t with a significant potential increase to the NPV.