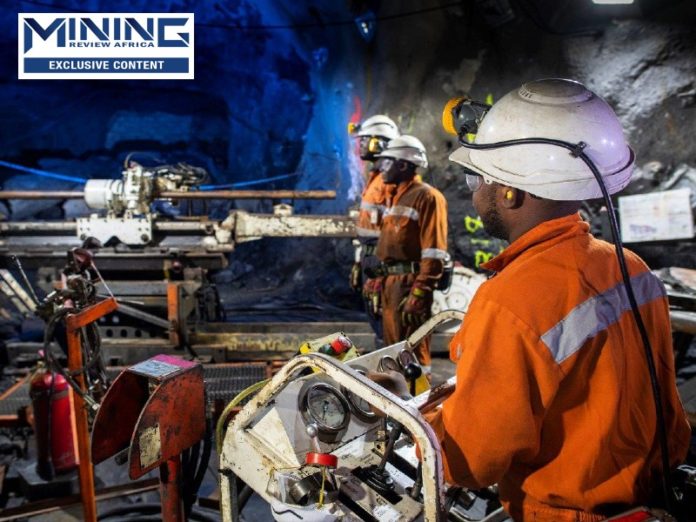 AngloGold Ashanti, one of Africa’s largest gold producers, has successfully proven its ability to transform the historic Brownfields Obuasi gold mine in the Ashanti region of Ghana into a modern, mechanised mining operation capable of producing more than 400 000 ozpa of gold over the next two decades, with additional scope to go beyond that, writes CHANTELLE KOTZE.

Acquired upon the merger of AngloGold and Ashanti Goldfields in 2004, the 124-year-old deep-level Obuasi gold mine produced gold until 2014 when AngloGold Ashanti suspended underground mining operations amid weak gold prices and ongoing financial losses. The mine was placed on limited operations until time would enable the company to recapitalise and redevelop the iconic mine.

In February 2018, the company announced that it had signed the necessary regulatory and fiscal agreements with the government of Ghana to provide the framework for the redevelopment of Obuasi.

According to Graham Ehm, executive VP of group planning and technical management at AngloGold Ashanti, who is providing strategic oversight on the redevelopment project, Obuasi’s redevelopment required extensive work to get the operation to a point where it could deliver cash flow into the business and deliver against the envisioned mine plan.

“The operation’s poor efficiency and availability needed to be addressed and the recovery optimised,” he explains, noting that the underground mine infrastructure needed to be refurbished and the small-scale, labour intensive open-stoping mining method modernised.

A closer look at the two-phase redevelopment

The first phase of the two-phase Obuasi Redevelopment project, which began at the start of 2019, entailed mine rehabilitation and infrastructure refurbishment to enable gold production to resume at a rate of 2 000 tpd for the first operating year, allowing the company to establish cash flow, Ehm explains. This phase was successfully completed on time and on budget and culminated in the pouring of first gold at the mine in December 2019.

This was followed by the second phase of the Obuasi Redevelopment. Ehm explains that this phase included the refurbishment of the underground materials handling system, shafts and ventilation. “The KMS shaft was refurbished and is now being used for hoisting while a new 612-m-deep by 5.8-m-diameter ventilation shaft was established,” he says.

By the end of March 2021, the Obuasi Redevelopment project was 97% complete. Obuasi produced 46 000 oz of gold in the first quarter of 2021, with production expected to steadily ramp up to 5 000 tpd over the next three years.

Despite well over a century of sustained mining, Obuasi has an estimated 8.7 Moz gold in reserve and 29.5 Moz of mineral resources, which could comfortably sustain mining for well over the next two decades. In doing so, the company expects production in the first 10 years to average between 350 000 ozpa to 400 000 ozpa, while production in the following 10 years is forecast at between 400 000 ozpa to 450 000 ozpa. The average gold grade at Obuasi is between 8-10 g/t, with sections within the ore body averaging as high as 16 g/t.

In May, a fall of ground resulted in the death of one of the employees of AngloGold Ashanti’s mining contractor at Obuasi. Work was immediately voluntarily halted and an investigation into the incident and review of the mine’s production areas is being carried out.

“Even though the incident occurred in a small area of the overall mine, we did want to pause and review, having a look at each of the mine’s production areas before resuming stoping and mining activity. When we designed Obuasi’s redevelopment, we were careful to consider what is involved in resuming mining in a mine that has a lot of history. We designed the operating systems, ground management system and mining schedule to cater for being in a historical mine,” said Ehm.

Once the redevelopment plan is complete, underground mining will take place using large equipment, including development drilling jumbos and 60 t dump trucks and 20 t loaders operating at a depth of about 1.5 km at the 5 000 level. The mine will be accessed via two main vertical shafts, GCS and KMS, and 6 m x 6 m decline access for some materials and equipment. An additional shaft, Adansi, is used for dewatering at the extreme north of the mine, explains Ehm.

The mine will also have a level of automation that never before existed, explains Ehm. “The KMS shaft is now hoisting automatically, with loading operations controlled at surface and full wireless connectivity underground, which enables real-time tracking of people and equipment,” he says. The process plant has also been modernised with a modern control system, and automated power systems, says Ehm.

He continues, outlining that the ore body, which contains both refractory ore and visible gold in quartz, comprises a series of three shears, dipping at about 35° from the south to the north as it gets deeper. Mine production in the first 10 years will focus on the upper ore bodies, moving from 800 m (2 600 level) below surface down to 1 500 m. “There is drilling as far down as 7 000 level, which is 2 000 m below surface,” says Ehm, noting that there is plenty ore body to mine before reaching those depths.

With regard to operational readiness, which Ehm believes is equally important as building the project, AngloGold Ashanti fully redesigned the organisation and systems to enable the company to establish itself as a modern business. The company introduced modern employment contracts, fair compensation and an integrated, accountable and empowered culture among its employees.

Recruitment and training in this regard was also an imperative, as was ensuring the greatest Ghanaian participation possible, in procurement, contracting as well as direct and indirect employment, with levels exceeding 80%.

Ehm explains that the new Obuasi will employ more skilled and considerably fewer people than in the past, noting that there will be 850 AngloGold Ashanti employees, excluding contractors, compared with the workforce of 4 000 people when mining was suspended in 2014.